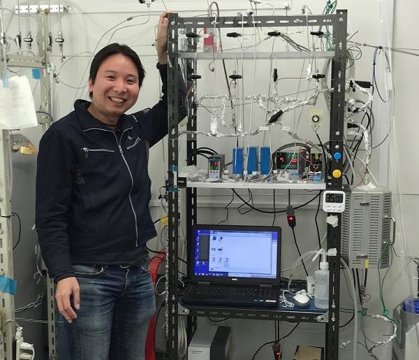 Most studies on catalysts have been conducted by researchers in chemistry. However, catalysts also relate to other research fields. For example, materials science including metallurgy is effective for making and analyzing catalysts, and solid state physics is necessary to understand an electronic structure which is an important factor to catalytic properties. Therefore, an approach from different fields would be effective for catalytic studies.

Heusler alloys (formula: X2YZ) are very popular as magnetic (spintronic), thermoelectric, and shape memory materials. Although they are almost unknown as catalysts, they have great features: 1) having so many possible sets of X, Y, and Z; and 2) elemental substitution is possible (e.g. X2YZ1-xZ’x). Feature 1 expects a discovery of new catalysts and feature 2 enables fine-tuning of catalytic properties.

Takayuki Kojima of Tohoku University, whose PhD involved researching magnetic materials, conceived the use of Heusler alloys as catalysts, and has conducted the research with the An Pang Tsai research group that studies catalysts from a metallurgy viewpoint. They found good catalysts, Co2 (Mn or Fe) Ge, for selective hydrogenation of alkyne, based on feature 1. They also demonstrated the precise control of catalysis based on feature 2.

The discovered catalysts do not include precious noble metals unlike industrial Pd-based catalysts. They may replace the Pd catalysts if the surface area is enlarged enough e.g. by making nanoparticles.

In addition, the tuning of catalysis by elemental substitution is hard to do in ordinary alloys. This discovery not only has practical advantage but will also be useful for investigating mechanisms of catalysis on alloys which are still not fully revealed.

As a next step, the team aims to develop practical catalysts with large surface areas and to reveal the mechanisms of good performance in depth. “We believe that this study will inspire many researchers in all related fields to try to find good Heusler catalysts for various reaction processes,” said Kojima.