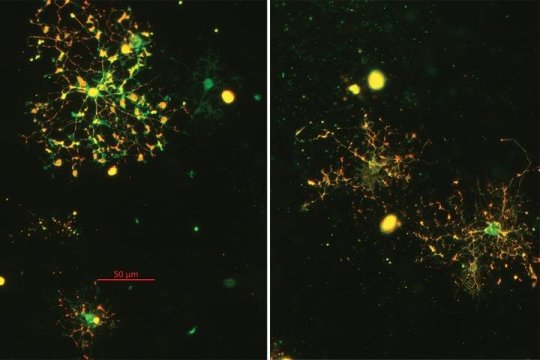 A study recently published in Translational Psychiatry, a Nature journal, has shown how using cultured cells from patients with psychotic disorders, such as schizophrenia, to investigate abnormalities in nerve connections in the brain could lead to new treatments. Strong correlations were observed between the findings in the cells in culture — grown outside the body in a controlled environment — and findings from brain imaging performed on the very same human participants.

“The findings are important, because if the health of cells in culture reflects the health of the same cells in a human brain, we may be able to create a better model for studying psychotic disorders,” said the study’s senior author, Bruce M. Cohen, MD, PhD, director of McLean Hospital’s Program for Neuropsychiatric Research (PNPR). Cohen said such a model could give researchers a greater capacity to find genetic and biochemical targets in the brain. Using these targets, he said, “could enable us to develop novel and more effective interventions for psychotic disorders.”

For their work, Cohen and his colleagues, including first author Donna L. McPhie, PhD, director of the Cellular Neuropsychiatry Laboratory in the PNPR, drew on studies showing that altered pathways of brain development can be found across most cases of schizophrenia and that inaccurate connections and “leaks” in signaling between nerve cells are a feature of many psychotic disorders. A substance called myelin, produced by cells called oligodendrocytes, serves as a kind of insulation to prevent these leaks. In studies at McLean Hospital by co-author Dost Öngür, MD, PhD, chief of the Psychotic Disorders Division at McLean, and his colleagues, myelin was measured and found to be reduced in the brain in patients with schizophrenias.

Based on this prior research, Cohen and his colleagues drew on a repository of cell lines they had obtained from patients with psychiatric disorders. These samples were reprogrammed from skin cells into brain-like cells in the laboratory. The reprogrammed cell lines, taken from both ill and healthy patients, produced nerve cells and support cells called glia, including oligodendrocytes, in laboratory cultures. Investigations into these cells revealed significant abnormalities in the development of oligodendrocytes grown from subjects with psychotic disorders.

The research also revealed a strong correlation between the number of oligodendrocytes in culture and the amount of myelin made by these cells in the brains of the same subjects who provided the cells. This finding, Cohen explained, “means that we can now study the causes of the abnormality of myelin that we have observed in living brain tissue in a laboratory setting.”

For Cohen and his colleagues, the prospect of using lab cultures to examine differences in the brains of individuals with psychotic illnesses is “an exciting development.” For example, Cohen said, researchers have observed that not all genes and proteins necessary to make oligodendrocytes are affected in these cells, and they can now begin to identify exactly what genes and proteins are different in these cells. It would be impossible, he said, to do these detailed studies in living brain tissue.

Such studies, the researchers believe, could lead to better treatment approaches for individuals with psychotic conditions. “Using in vitro cell cultures to study these abnormalities could help us identify specific genetic and biochemical targets that might be addressed by novel drug treatments, cell transplantation, or other interventions,” Cohen said.

Materials provided by McLean Hospital. Note: Content may be edited for style and length.