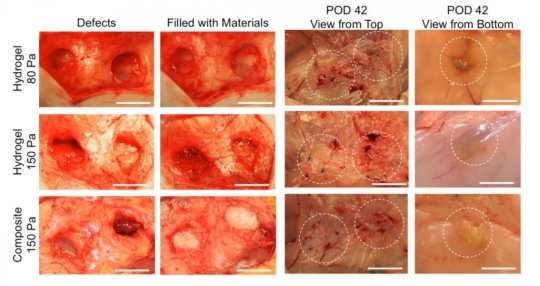 A team of plastic surgeons and material scientists has made an important advance in treating the common clinical problem of soft tissue loss. They have invented a synthetic soft tissue substitute that is well tolerated and encourages the growth of soft tissue and blood vessels. This new material retains its shape without being too dense, overcoming challenges with current tissue fillers that tend to be either too soft or not porous enough to let cells move in and start regrowing tissue. A report on this work appears today in Science Translational Medicine.

“As a plastic surgeon, I see patients every day who lose soft tissue like skin, fat and muscle from cancer surgery, trauma or other conditions. Currently our options are limited to implants, which are plagued by fibrosis and other problems, or ‘borrowing’ tissues from elsewhere in the body, which can cause deformity there as well,” says Sashank Reddy, M.D., Ph.D., an instructor in plastic and reconstructive surgery at the Johns Hopkins University School of Medicine and the medical director for Johns Hopkins Technology Ventures.

“Nature abhors a vacuum, and soft tissue defects can contract, deform and fill in with scar. In order to reconstruct these defects, we often move fat from one part of the body to another with a process called fat grafting. This is not always successful, as typically half of the grafted fat will die after it’s transplanted, and it’s often hard to predict how well these procedures will work out,” says Justin Sacks, M.D., M.B.A., vice chair of clinical operations and an associate professor of plastic and reconstructive surgery at the Johns Hopkins University School of Medicine.

Several years ago, Reddy and Sacks approached Hai-Quan Mao about developing a material that could allow them to do fewer invasive surgeries to replace lost soft tissue. They wanted to find a better way to help patients while avoiding some of the risks of surgery.

“This was an interesting problem to tackle from an engineering point of view,” says Hai-Quan Mao, Ph.D., a professor of materials science and engineering at the Whiting School of Engineering and biomedical engineering at the Johns Hopkins University School of Medicine and the associate director of the Institute for NanoBioTechnology at Johns Hopkins. “Typically a gel-like material that’s porous enough for cells to spread inside is too soft to be able to hold its shape, and a material that is able to retain its shape when placed in the soft tissue defects is conversely too dense for cells to grow into. We really needed to synthesize a new material that is soft and porous yet resilient — almost like fat tissue or Jell-O.”

Since fat often is used to fill in space during reconstructive surgery procedures, the team started by examining the structure and physical properties of fat. They used real human fat as well as animal fat and measured everything about it — how elastic it is, how viscous and how bouncy. They also examined its microscopic structure, which consists of large cells clustered around a fibrous matrix — the extracellular matrix — that lends shape and stability to fat tissue. Once they had those measurements, they started experimenting. They reasoned that the material needed to be safe and well tolerated, so they started with a so-called hydrogel made of hyaluronic acid, a naturally occurring component of the body’s extracellular matrix. Further, hyaluronic acid is already used in more than 90 percent of commercial cosmetic dermal fillers in the United States. But the hydrogel alone cannot retain its shape while retaining porosity, says Mao; rather it will be deformed too easily at the site of repair in the body. So they added another material to the hydrogel to help give it some stiffness. The research team turned to polycaprolactone (PCL) fibers, the same material used in some resorbable stitches.

“These fibers are about one one-hundredth the diameter of a human hair, but even at that size, we knew we had to limit how much we used. Too much and the resulting material would be too thick to inject through a thin needle,” says Russell Martin, Ph.D., a postdoctoral fellow in materials science and engineering at Johns Hopkins who spearheaded this project. So they broke the fibers into short pieces, mixed them into hydrogel, and through a chemical reaction, caused the fibers to bond with the hydrogel to form what’s called a composite.

In order for the composite to work as hoped, it had to match the stiffness of the surrounding tissue, yet be porous enough for cells in that tissue to move in. So the team first experimented with lab-grown human blood vessel cells and fat stem cells to figure out what kinds of conditions would favor cells to infiltrate into the composite to grow. They compared pure hydrogel with the new composite material, both with similar levels of stiffness. They found that the cells were unable to penetrate pure hydrogel, but not only were the cells able to move into the composite, they also formed networks that looked like blood vessels.

So then the team wanted to mimic a soft tissue repair scenario with the composite to see how well it would work. Using rabbits, they removed 1 cubic centimeter of fat from the flank, then injected that same site with either composite or hydrogel. This volume imitates the individual droplets of fat that are transferred currently in clinical fat grafting. The results mimicked what was seen in the rat experiments with substantially better tissue ingrowth into the composite.

“We are really excited about this material as it provides a good foundation for other types of studies and uses in the future,” says Reddy.

“As an engineer, it’s common for us to invent something, then try to get people to use it. In this case, the need came from the patients and surgeons in the clinic, we took it to the bench and now we are on our way to bringing a solution back to the clinic; we’ve almost gone full circle,” says Mao.

The team hopes to test this composite in patients with soft tissue deficits within a year.