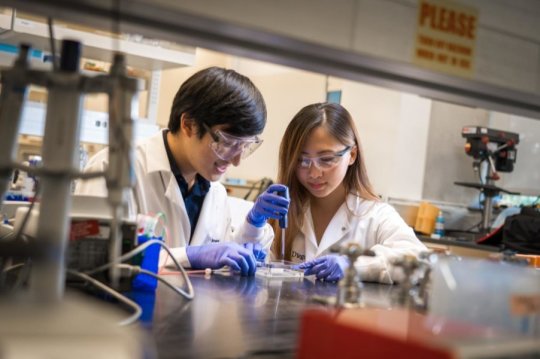 Bioengineers at the University of California San Diego have developed a 3D bioprinting technique that works with natural materials and is easy to use, allowing researchers of varying levels of technical expertise to produce lifelike organ tissue models.

As a proof of concept, the UC San Diego team used their method to create blood vessel networks capable of keeping a breast cancer tumor alive outside the body. They also created a model of a vascularized human gut. The work was published recently in Advanced Healthcare Materials.

The goal isn’t to make artificial organs that can be implanted in the body, researchers said, but to make easy-to-grow human organ models that can be studied outside the body or used for pharmaceutical drug screening.

“We want to make it easier for everyday scientists — who may not have the specialization required for other 3D printing techniques — to make 3D models of whatever human tissues they’re studying,” said first author Michael Hu, a bioengineering Ph.D. student at the UC San Diego Jacobs School of Engineering. “The models would be more advanced than standard 2D or 3D cell cultures, and more relevant to humans when it comes to testing new drugs, which is currently done on animal models.”

“You don’t need anything complicated to adopt this into your lab,” said Prashant Mali, a bioengineering professor at the UC San Diego Jacobs School of Engineering the study’s senior author. “Our hope is that multiple labs will be able to work with this and experiment with this. The more it gets adopted, the more impact it could have.”

The method is simple. To make a living blood vessel network, for example, researchers first digitally design a scaffold using Autodesk. Using a commercial 3D printer, the researchers print the scaffold out of a water soluble material called polyvinyl alcohol. They then pour a thick coating — made of natural materials — over the scaffold, let it cure and solidify, and then flush out the scaffold material inside to create hollow blood vessel channels. Next, they coat the insides of the channels with endothelial cells, which are the cells that line the insides of blood vessels. The last step is to flow cell culture media through the vessels to keep the cells alive and growing.

The vessels are made of natural materials found in the body such as fibrinogen, a compound found in blood clots, and Matrigel, a commercially available form of actual mammalian extracellular matrix.

Finding the right materials was one of the biggest challenges, said bioengineering undergraduate student Xin Yi (Linda) Lei, a co-author on the study. “We wanted to use materials that were natural rather than synthetic, so we could make something as close to what’s in the body as possible. They also needed to be able to work with our 3D printing method.”

“We can use these everyday biologically derived materials to make ex vivo tissues that are vascularized,” said Mali. “And that’s an important aspect if we want to make tissues that can be sustained for very long periods of time outside the body.”

In one set of experiments, the researchers used the printed blood vessels to keep breast cancer tumor tissues alive outside the body. They extracted pieces of tumors from mice and then embedded some of the pieces in the printed blood vessel networks. Other pieces were kept in a standard 3D cell culture. After three weeks, the tumor tissues encapsulated in the blood vessel prints had stayed alive. Meanwhile, those in the standard 3D cell culture had mostly died off.

“Our hope is that we can apply our system to make tumor models that can be used to test anti-cancer drugs outside the body,” said Hu, who is particularly interested in studying breast cancer tumor models. “Breast cancer is one of the most common cancers — it has one of the largest portions of research dedicated to it and one of the largest panels of pharmaceuticals being developed for it. So any models we can make would be useful to more people.”

In another set of experiments, the researchers created a vascularized gut model. The structure consisted of two channels. One was a straight tube lined with intestinal epithelial cells to mimic the gut. The other was a blood vessel channel (lined with endothelial cells) that spiraled around the gut channel. The aim was recreate a gut surrounded by a blood vessel network. Each channel was then fed with media optimized for its cells. Within two weeks, the channels has started taking on more lifelike morphologies. For example, the gut channel had started to sprout villi, which are the tiny finger-like projections lining the inside of the intestinal wall.

“With this type of strategy, we can start to make complex, long living systems in an ex vivo setting. In the future, this could perhaps supplant the use of animals to make these systems, which is what’s being done right now,” said Mali.

“This was a proof of concept showing we can culture different types of cells together, which is important if we want to model multi-organ interactions in the body. In a single print, we can create two distinct local environments, each keeping a different type of cell alive, and placed close enough together so that they can interact,” said Hu.

Moving forward, the team is working on extending and refining this technique. Future work will focus on optimizing the printed blood vessels and developing vascularized tumor models that more closely mimic those in the body.