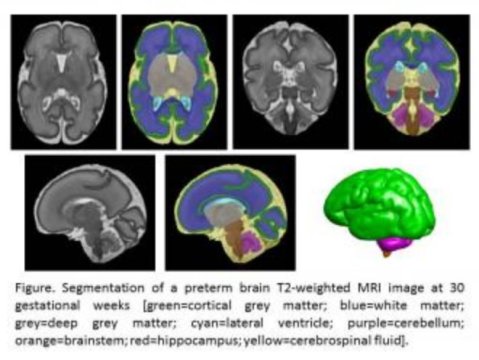 “Compared with macronutrients like carbohydrates and proteins, lipid intake during the first month of life is associated with increased overall and regional brain volume for micro-preemies,” says Catherine Limperopoulos, Ph.D., director of MRI Research of the Developing Brain at Children’s National and senior author. “Using non-invasive magnetic resonance imaging, we see increased volume in the cerebellum by 2 weeks of age. And at four weeks of life, lipids increase total brain volume and boost regional brain volume in the cerebellum, amygdala-hippocampus and brainstem.”

The cerebellum is involved in virtually all physical movement and enables coordination and balance. The amygdala processes and stores short-term memories. The hippocampus manages emotion and mood. And the brainstem acts like a router, passing messages from the brain to the rest of the body, as well as enabling essential functions like breathing, a steady heart rate and swallowing.

According to the Centers for Disease Control and Prevention, about 1 in 10 U.S. babies is born preterm, or before 37 weeks gestation. Regions of the brain that play vital roles in complex cognitive and motor activities experience exponential growth late in pregnancy, making the developing brains of preterm infants particularly vulnerable to injury and impaired growth.

Children’s research faculty examined the impact of lipid intake in the first month of life on brain volumes for very low birth weight infants, who weighed 1,500 grams or less at birth. These micro-preemies are especially vulnerable to growth failure and neurocognitive impairment after birth.

The team enrolled 68 micro-preemies who were 32 weeks gestational age and younger when they were admitted to Children’s neonatal intensive care unit during their first week of life. They measured cumulative macronutrients — carbohydrates, proteins, lipids and calories — consumed by these newborns at 2 and 4 weeks of life. Over years, Limperopoulos’ lab has amassed a large database of babies who were born full-term; this data provides unprecedented insights into normal brain development and will help to advance understanding of brain development in high-risk preterm infants.

According to Limperopoulos, Children’s future research will examine the optimal timing and volume of lipids to boost neurodevelopment for micro-preemies.

Materials provided by Children’s National Health System. Note: Content may be edited for style and length.