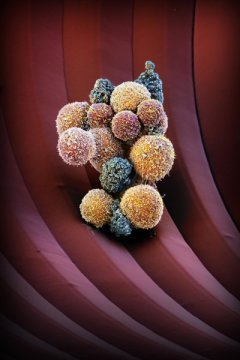 The most deadly aspect of breast cancer is metastasis. It spreads cancer cells throughout the body. Researchers at the University and the University Hospital of Basel have now discovered a substance that suppresses the formation of metastases. In the journal Cell, the team of molecular biologists, computational biologists, and clinicians reports on their interdisciplinary approach.

The development of metastasis is responsible for more than 90% of cancer-related deaths, and patients with a metastatic disease are considered incurable. The interdisciplinary team led by Prof. Nicola Aceto from the Department of Biomedicine at the University of Basel has identified a drug that suppresses the spread of malignant cancer cells and their metastasis-seeding ability.

Circulating tumor cells (CTCs) are cancer cells that leave a primary tumor and enter the bloodstream, on their way to seeding distant metastases. These so-called CTCs can be found in the blood of patients as single cells or cell clusters. CTC clusters are the precursors of metastases. The Basel research team has discovered that CTC cluster formation leads to key epigenetic changes that facilitate metastasis seeding. These changes enable CTC clusters to mimic some properties of embryonic stem cells, including their ability to proliferate while retaining tissue-forming capabilities. The scientists have also shown that these epigenetic changes are fully reversible upon the dissociation of CTC clusters.

In their search for a substance that suppresses metastasis development, the research team tested 2486 FDA-approved compounds used for a number of different indications. They found inhibitors with the unexpected ability to dissociate patient-derived CTC clusters. This drug-based dissociation of CTC clusters into individual cells also resulted into epigenetic remodeling and prevented the formation of new metastases.

“We thought of acting differently from standard approaches, and sought to identify drugs that do not kill cancer cells, but simply dissociate them,” states Nicola Aceto, holder of an ERC starting grant and SNSF professorship.

In the fight against breast cancer, metastases remain the greatest danger. These new findings on the mechanisms of metastasis formation are the result of a large collaborative effort across various disciplines. “Our ambitious approach would not have been possible without collaboration with outstanding clinicians, molecular and computational biologists, with the support of state-of-the-art technology platforms,” says Aceto and adds: “Our methodology is positioned directly at the interface between these different disciplines. We are already working on the next step, which is to conduct a clinical trial with breast cancer patients.”