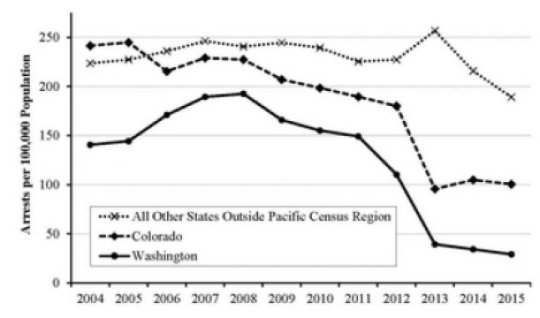 Washington State University researchers have found that marijuana legalization in Colorado and Washington has not hurt police effectiveness. In fact, clearance rates for certain crimes have improved.

Clearance rates — the number of cases solved, typically by the arrest of a suspect — were falling for violent and property crimes in the two states before they authorized retail sales of marijuana late in 2012. The rates then improved significantly in Colorado and Washington while remaining essentially unchanged in the rest of the nation, according to the researchers’ analysis of monthly FBI data from 2010 through 2015.

“Our results show that legalization did not have a negative impact on clearance rates in Washington or Colorado,” said David Makin assistant professor in WSU’s Department of Criminal Justice and Criminology “In fact, for specific crimes it showed a demonstrated, significant improvement on those clearance rates, specifically within the realm of property crime.”

Writing this month in the journal Police Quarterly the researchers said legalization created a “natural experiment” to study the effects of a sweeping policy change on public health and safety.

“If you think about our history, it’s rare where you have something that is entirely illegal that then becomes legal,” said Makin. “And we have an opportune moment to study to what extent that particular change had on society.”

Citizens in 12 states have voted on marijuana legalization and proponents in all of them have argued that it would let police reallocate resources to property and violent crimes. The Colorado measure specifically says it is “in the interest of the efficient use of law enforcement resources” while the Washington one says it “allows law enforcement resources to be focused on violent and property crimes.”

The WSU study bears that out. It finds that after legalization:

The improvement in burglary clearance rates is particularly striking for Washington, Makin said, as the state’s property crime rate is higher than most.

“It demonstrates just how critical these types of policy changes can be,” Makin said. “I would offer it truly demonstrates why we need empirical data to support these types of studies, so we can understand to what extent crime and communities are influenced as more and more states move to legalization.”

As Makin describes, this research is not without its limitations. He offers “one of the pressing limitations within this study is that not all agencies equally report their clearance rates. It is entirely possible that as we expand our data collection to include additional years, more states, and a wider set of agencies, these results could change.”

Makin also acknowledged that while he and his colleagues found a correlation between legalization and clearance rates, they do not have an explicit cause. The improvements could be the result of more overtime for law enforcement officers, new strategies or a focus on particular crimes. But Makin said he suspects that the loss of the specific reporting category of marijuana arrests prompted police departments to reevaluate their priorities, particularly in “boots on the ground” cases.