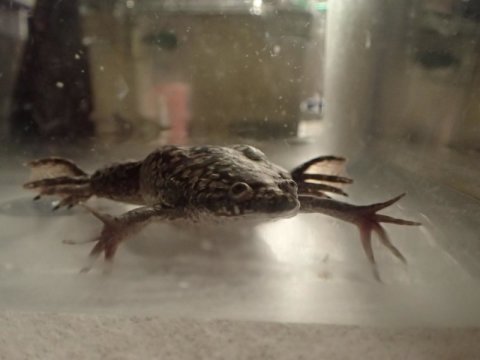 A team of scientists designed a device that can induce partial hindlimb regeneration in adult aquatic African clawed frogs (Xenopus laevis) by “kick-starting” tissue repair at the amputation site. Their findings, appearing November 6 in the journal Cell Reports, introduce a new model for testing “electroceuticals,” or cell-stimulating therapies.

The scientists 3D printed the bioreactor out of silicon and filled it with hydrogel — a sticky glob of polymers. They laced the hydrogel with hydrating silk proteins that promote healing and regeneration, then added progesterone. Progesterone is best known for its role in preparing the uterus for pregnancy, but the hormone has also been shown to promote nerve, blood vessel, and bone tissue repair.

When they looked at the experimental group frogs at different time points over 9.5 months, they noticed that the bioreactor seemed to trigger a degree of limb regeneration not observed in the other groups. Instead of a typical spike-like structure, the bioreactor treatment resulted in a paddle-like formation closer to a fully formed limb than unaided regeneration could create.

“The bioreactor device created a supportive environment for the wound where the tissue could grow as it did during embryogenesis,” says Levin. “A very brief application of bioreactor and its payload triggered months of tissue growth and patterning.”

Levin and his team took a closer look at the regenerated structures using molecular and histology analyses. They saw that, unlike in the control and sham groups, the regenerating limbs of the bioreactor-treated frogs were thicker with more developed bones, innervation, and vascularization. Analyzing video footage of the frogs in their tanks, they also noticed that the frogs could swim more like unamputated frogs.

RNA sequencing and transcriptome analysis revealed that the bioreactor had altered the gene expression occurring in cells at the amputation site. Genes involved in oxidative stress, serotonergic signalling, and white blood cell activity were upregulated, while some other signaling-related genes were downregulated.

The researchers also observed that scarring and immune responses were downregulated in the bioreactor-treated frogs, suggesting that the added progesterone dampened the body’s natural reaction to injury in a way that benefited the regeneration process.

“In both reproduction and its newly discovered role in brain functioning, progesterone’s actions are local or tissue-specific,” says first author Celia Herrera-Rincon, neuroscientist in Levin’s lab at Tufts University. “What we are demonstrating with this approach is that maybe reproduction, brain processing, and regeneration are closer than we think. Maybe they share pathways and elements of a common — and so far, not completely understood — bioelectrical code.”

Levin’s lab will continue to target bioelectric processes for inducing spinal cord regeneration and tumor reprogramming. They also hope to replicate their bioreactor experiment in mammals. Previous research suggests that mice can partially regenerate amputated fingertips in the right conditions, but their life on land hinders this process.

“Almost all good regenerators are aquatic,” says Levin. “You can imagine why this matters: a mouse that loses a finger or hand, and then grinds the delicate regenerative cells into the flooring material as it walks around, is unlikely to experience significant limb regeneration.”

Levin plans to next add sensors to the device for remote monitoring and optogenetic stimulation, which he hopes will improve control over cellular decision making after injury.