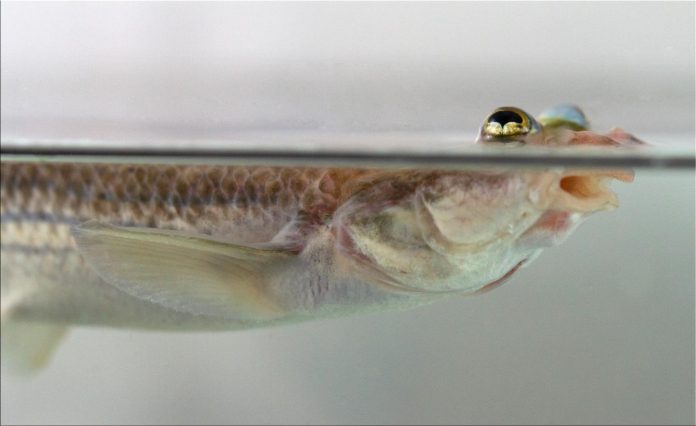 Four-eyed fishes of the genus Anableps and their relatives are a fish family from the Neotropics with a number of bizarre traits that have fascinated naturalists for centuries. These include: (i) a “split” eye that allows them to see both above and under the water surface at the same time; (ii) being live-bearers, meaning that they give birth to fully developed offspring just like mammals; and (iii) conspicuously asymmetric genitalia among the males of all species and among the females of some species.

New research carried out by evolutionary biologists from the University of Konstanz in collaboration with the Fundación Miguel Lillo in Argentina and published in the Proceedings of the Royal Society B shows that the direction of genital asymmetry in anablepid fishes is not inherited but, in fact, determined randomly.

“We started out with a fairly simple question”, says Dr Julián Torres-Dowdall, lead author on the study and a researcher in the University of Konstanz?s Zoology and Evolutionary Biology laboratory led by Professor Axel Meyer: “Do left-sided males father mostly left-sided sons? This may appear to be a strange question to ask, but for evolutionary biologists, asymmetry in general, and the issue of heritability in particular, is incredibly interesting due to its potential to drive the emergence of new species”.

Anablepid fishes are especially interesting not only because their genitals are asymmetric – an uncommon trait they share with some insects, snakes, most ruminant mammals, waterfowl and certain fish families. Interestingly, individuals with left or right-sided genitalia can be found at similar proportions within populations. “This is rare and useful at the same time as it allows us to address the issue of heritability and, consequently, to understand the evolution and maintenance of both genital forms (lefties and righties) and its potential to differentiate populations and possibly speciation”, adds Torres-Dowdall.

To determine whether sidedness of genitalia in anablepid fishes is determined genetically and passed down to the next generation, the researchers studied two genera of the Anablepidae family: Anableps, which comprises three species of four-eyed fish, and Jenynsia, a genus comprised of 15 species of one-sided live-bearers. Combining breeding experiments with genomic analyses, the team established that there is no strong heritability to the direction of genital asymmetry in anablepid fishes.

“Our experiments with both captive and natural populations showed that all offspring were asymmetric – with a near-equal proportion of left and right genitalia in the natural populations and in the breeding experiment”, says Torres-Dowdall. In both cases, the sons’ genital sidedness was independent from the father’s sidedness. “This strongly suggests that the direction of asymmetry is determined by chance rather than heredity and goes some way towards explaining the persistence of this peculiar trait over time”.

Incompatibility between morphs not a driver of speciation

The genomic analyses showed no evidence that genetic markers, i.e. specific regions of the genome, are associated with genital asymmetry. Furthermore, there was no evidence of accumulated genomic differences between left- and right-sided individuals. This conforms with the general pattern found in other species with similar asymmetric traits. Also, there is no suggestion that the existence of left and right-sided genitalia should be regarded as potential drivers of speciation: “There is the idea that incompatibility between left and right-sided individuals might potentially result in the evolution of two new asymmetric, yet either left or right-sided, species”, explains Torres-Dowdall. “However, for a new species to evolve, variation in the direction of asymmetry would have to have a genetic component. Our study strongly suggests that this is not the case with anablepid fishes”.

– New research carried out by evolutionary biologists from the University of Konstanz in collaboration with the Fundación Miguel Lillo in Argentina resolves century-old research question regarding the polymorphic characteristics of the reproductive organs of internally fertilizing anablepid fishes.

– Combining breeding experiments with genomic analyses, the researchers, including Dr Julián Torres-Dowdall from the Zoology and Evolutionary Biology group at the University of Konstanz led by Professor Axel Meyer, were able to show that the direction of genital asymmetry in anablepid fishes is random rather than heritable.

– Funded by the German Research Foundation (DFG) and the Zukunftskolleg of the University of Konstanz (funding provided to Dr Julián Torres-Dowdall) as well as the Hector Academy and an advanced grant of the European Research Council to Professor Axel Meyer.

Caption: A specimen of Anableps, a genus of four-eyed fishes which, alongside their relatives, constitute the Anablepidae family of fishes. Among their peculiar characteristics are a “split” eye for aquatic and aerial vision, being live-bearers that give birth to fully developed offspring, and asymmetric genitalia among the males of all species and the females of some species.