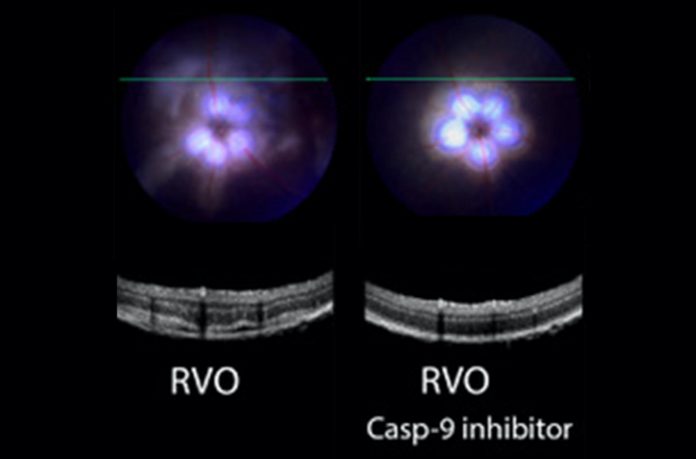 A study, in mice, suggests that the experimental therapy — which targets a common cause of neurodegeneration and vascular leakage in the eye — could have broader therapeutic effects than existing drugs.

The study was published in Nature Communications.

What is Retinal Vein Occlusion?

Retinal vein occlusion occurs when a major vein that drains blood from the retina is blocked, usually due to a blood clot. As a result, blood and other fluids leak into the retina, damaging specialized light-sensing neurons called photoreceptors.

Standard treatment for the condition currently relies on drugs that reduce fluid leakage from blood vessels and abnormal blood vessel growth. But there are significant drawbacks. These therapies require repeated injections directly into the eye, and for the patients who brave this daunting prospect, the treatment ultimately fails to prevent vision loss in the majority of cases.

The new treatment targets an enzyme called caspase-9, says Carol M. Troy, MD, PhD, professor of pathology & cell biology and of neurology in the Taub Institute for Research on Alzheimer’s Disease and the Aging Brain at Columbia University Vagelos College of Physicians and Surgeons, who led the studies. Under normal conditions, caspase-9 is believed to be primarily involved in programmed cell death, a tightly regulated mechanism for naturally eliminating damaged or excess cells.

However, in studies of mice, the Troy lab discovered that when blood vessels are injured by retinal vein occlusion, the caspase-9 becomes uncontrollably activated, triggering processes that can damage the retina.

The Troy lab found that a highly selective caspase-9 inhibitor, delivered in the form of eye drops, improved a variety of clinical measures of retinal function in a mouse model of the condition. Most importantly, the treatment reduced swelling, improved blood flow, and decreased neuronal damage in the retina.

“We believe these eye drops may offer several advantages over existing therapies,” says Troy. “Patients could administer the drug themselves and wouldn’t have to get a series of injections. Also, our eye drops target a different pathway of retinal injury and thus may help patients who do not respond to the current therapy.”

The researchers are preparing to test the eye drops in people with retinal vein occlusion during a phase I clinical trial.

Moving forward, the Troy lab will also study whether caspase-9 inhibitors can be used to treat other vascular injuries caused by overactivation of the enzyme, including diabetic macular edema (another common cause of blindness) and stroke.

“Vascular dysfunction is at the heart of many chronic neurological and retinal disorders, because high energy demands in the brain and eye render these tissues exceptionally vulnerable to disruption in blood supply,” says the study’s first author, Maria Avrutsky, PhD, postdoctoral research scientist in pathology & cell biology at Columbia University Vagelos College of Physicians and Surgeons.

Columbia University Irving Medical Center provides international leadership in basic, preclinical, and clinical research; medical and health sciences education; and patient care. The medical center trains future leaders and includes the dedicated work of many physicians, scientists, public health professionals, dentists, and nurses at the Vagelos College of Physicians and Surgeons, the Mailman School of Public Health, the College of Dental Medicine, the School of Nursing, the biomedical departments of the Graduate School of Arts and Sciences, and allied research centers and institutions. Columbia University Irving Medical Center is home to the largest medical research enterprise in New York City and State and one of the largest faculty medical practices in the Northeast. For more information, visit cuimc.columbia.edu or columbiadoctors.org.