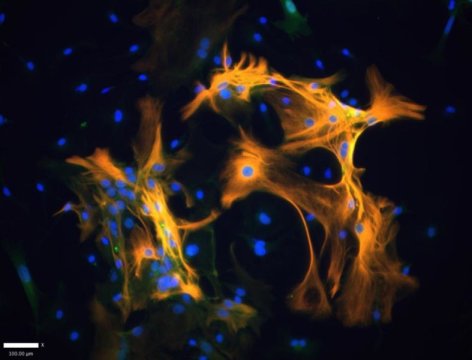 Drug combinations known as antiretroviral therapy have been very successful in suppressing the effects of HIV in infected people. However, about 50 percent of people on long-term antiretroviral therapy still experience HIV-related learning and memory problems. Exactly how HIV causes these problems is unclear.

To investigate the role of HIV in neurocognitive impairment, Gu and colleagues infected mice with a genetically engineered rodent version of HIV known as EcoHIV. They found that the mice’s immune systems were able to suppress EcoHIV levels and EcoHIV complications; similar effects are seen in response to antiretroviral therapy in humans. As in humans, the mice nonetheless experienced learning and memory problems.

The researchers found that, similarly to humans, the infected mice harbored dormant viral reserves in immune system T cells. However, despite the mice’s robust immune systems, the virus also appeared at low levels in the brain, and actively replicating EcoHIV was found in macrophages. When mice lacking T cells were infected with EcoHIV, they still experienced cognitive problems, suggesting that the infected macrophages were enough to drive this impairment.

These findings add to growing evidence that macrophages harboring active HIV may transport HIV to the brain, leading to cognitive problems in infected people. The researchers suggest that EcoHIV infection of mice could serve as a powerful and versatile research tool for further investigation of these effects and development of strategies to prevent them.

Dr. Volsky added: “Cognitive impairment is a common problem in a wide variety of human conditions including diabetes, aging, and Alzheimer’s Disease. Studies in the EcoHIV model of cognitive impairment may have broad implications for better understanding and treatment of these conditions as well.”