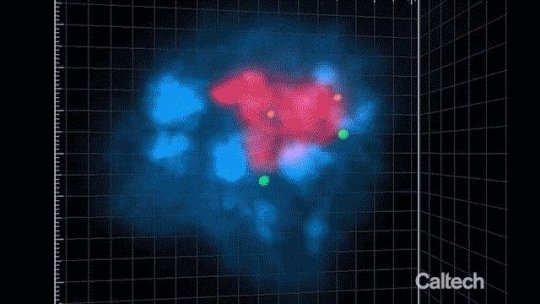 Nestled deep in each of your cells is what seems like a magic trick: Six feet of DNA is packaged into a tiny space 50 times smaller than the width of a human hair. Like a long, thin string of genetic spaghetti, this DNA blueprint for your whole body is folded, twisted, and compacted to fit into the nucleus of each cell.

Now, Caltech researchers have shown how cells organize the seemingly immense genome in a clever manner so that they can conveniently find and access important genes. Understanding the delicate three-dimensional organization of the genome is crucial, particularly because alterations in DNA structure have been linked to certain diseases such as cancer and early aging. Mapping and pinpointing alterations in nuclear structure may help in finding solutions to these diseases.

The work was done in the laboratory of Mitchell Guttman, assistant professor of biology and Heritage Medical Research Institute investigator. A paper describing the research appears in the June 7 online issue of the journal Cell.

Though the vast majority of cells in every human body contain identical genomes, different types of cells are able to have diverse functions because genes can be expressed at varying levels — in other words, they can be turned on or off. For example, when a stem cell is developing into a neuron, a flurry of activity happens in the nucleus to dial up and down levels of gene expression. These levels would be different, for example, if the stem cell was turning into a muscle cell or if the cell were making the decision to self-destruct.

In addition to the genome, the nucleus also contains structures called nuclear bodies, which are like miniature factories in the nucleus that contain a high concentration of cellular machinery all working to accomplish similar tasks, such as turning on specific sets of genes or modifying RNA molecules to produce proteins in the cell. This cellular machinery needs to be able to efficiently search through six feet of DNA — approximately 20,000 total genes, in mammals — in order to precisely find and control its targets. This is made possible because DNA is organized into three-dimensional structures that make certain genes more or less accessible.

In the new research, Guttman and his team describe a method to three-dimensionally map out how DNA is organized within the space of the nucleus and how regions of chromosomes interact with each other and with nuclear bodies. The technique, dubbed SPRITE (Split-Pool Recognition of Interactions by Tag Extension), allows researchers to examine clusters (or “complexes”) of molecules within the nucleus to see which molecules are interacting with each other and where they are located.

Led by graduate student Sofia Quinodoz, the team used SPRITE to discover that genes across different chromosomes (large folded structures of DNA) cluster together around specific nuclear bodies. Specifically, inactive genes — those that are turned off — across different chromosomes cluster together around a particular nuclear body called the nucleolus, which contains repressive proteins on DNA that keep genes turned off. Conversely, active genes grouped about another kind of nuclear body called the nuclear speckle, contain molecules that help turn the genes on and make them into proteins.

“With SPRITE, we were able to see thousands of molecules — DNAs and RNAs — coming together at various ‘hubs’ around the nucleus in single cells,” says Quinodoz, the study’s first author. “Previously, researchers theorized that each chromosome is kind of on its own, occupying its own ‘territory’ in the nucleus. But now we see that multiple genes on different chromosomes are clustering together around these bodies of cellular machinery. We think these ‘hubs’ may help the cell keep DNA that are all turned on or turned off neatly organized in different parts of the nucleus to allow cellular machinery to easily access specific genes within the nucleus.”