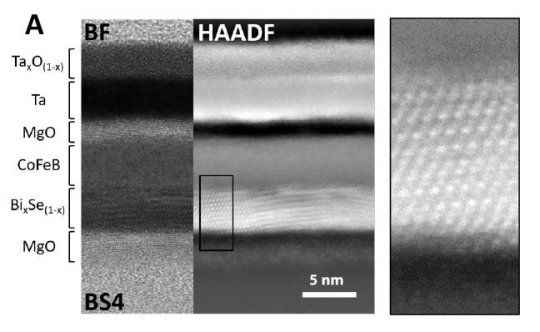 A team of researchers led by the University of Minnesota has developed a new material that could potentially improve the efficiency of computer processing and memory. The researchers have filed a patent on the material with support from the Semiconductor Research Corporation, and people in the semiconductor industry have already requested samples of the material.

The findings are published in Nature Materials, a peer-reviewed scientific journal published by Nature Publishing Group.

“We used a quantum material that has attracted a lot of attention by the semiconductor industry in the past few years, but created it in unique way that resulted in a material with new physical and spin-electronic properties that could greatly improve computing and memory efficiency,” said lead researcher Jian-Ping Wang, a University of Minnesota Distinguished McKnight Professor and Robert F. Hartmann Chair in electrical engineering.

The new material is in a class of materials called “topological insulators,” which have been studied recently by physics and materials research communities and the semiconductor industry because of their unique spin-electronic transport and magnetic properties. Topological insulators are usually created using a single crystal growth process. Another common fabrication technique uses a process called Molecular Beam Epitaxy in which crystals are grown in a thin film. Both of these techniques cannot be easily scaled up for use in the semiconductor industry.

In this study, researchers started with bismuth selenide (Bi2Se3), a compound of bismuth and selenium. They then used a thin film deposition technique called “sputtering,” which is driven by the momentum exchange between the ions and atoms in the target materials due to collisions. While the sputtering technique is common in the semiconductor industry, this is the first time it has been used to create a topological insulator material that could be scaled up for semiconductor and magnetic industry applications.

However, the fact that the sputtering technique worked was not the most surprising part of the experiment. The nano-sized grains of less than 6 nanometers in the sputtered topological insulator layer created new physical properties for the material that changed the behavior of the electrons in the material. After testing the new material, the researchers found it to be 18 times more efficient in computing processing and memory compared to current materials.

“As the size of the grains decreased, we experienced what we call ‘quantum confinement’ in which the electrons in the material act differently giving us more control over the electron behavior,” said study co-author Tony Low, a University of Minnesota assistant professor of electrical and computer engineering.

Researchers studied the material using the University of Minnesota’s unique high-resolution transmission electron microscopy (TEM), a microscopy technique in which a beam of electrons is transmitted through a specimen to form an image.

“Using our advanced aberration-corrected scanning TEM we managed to identify those nano-sized grains and their interfaces in the film,” said Andre Mkhoyan, a University of Minnesota associate professor of chemical engineering and materials science and electron microscopy expert.

Researchers say this is only the beginning and that this discovery could open the door to more advances in the semiconductor industry as well as related industries, such as magnetic random access memory (MRAM) technology.

“With the new physics of these materials could come many new applications,” said Mahendra DC (Dangi Chhetri), first author of the paper and a physics Ph.D. student in Professor Wang’s lab.

Wang agrees that this cutting-edge research could make a big impact.

“Research is all about being patient and collaborating with team members. This time there was a big pay off,” Wang said.

Materials provided by University of Minnesota. Note: Content may be edited for style and length.