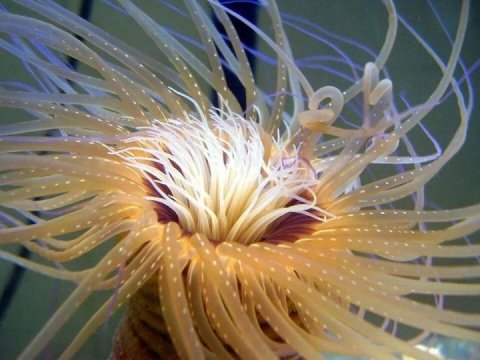 The tube-dwelling anemone is an ancient sea creature that resembles a prehistoric flower. The animals live slow, long and predictable lifestyles and look fairly similar from species to species.

It’d be easy to use the word “simple” when considering this relative of coral and jellyfish. But wait — not so fast.

New research on tube anemones is challenging everything that evolutionary biologists thought they knew about sea animal genetics. The mitochondrial DNA of the tube anemone, or Ceriantharia, is a real head scratcher, from its unexpected arrangement to its previously unimagined magnitude.

Researchers, including a team from The Ohio State University, have published new findings showing that the DNA of the tube anemone does what few other species’ mitochondrial genomes have been shown to do. It defies the classic doughnut shape it “should” be in and is arranged in several fragmented pieces, the number of which vary depending on the species.

On top of that, the animal now holds the record for the largest mitochondrial genome reported to date. It contains almost 81,000 base pairs, or pieces of genetic information, according to the new study, published online in the journal Scientific Reports. Human mitochondrial DNA contains fewer than 17,000 base pairs.

“These ancient animals have simple behavior and simple anatomy, and so we’ve thought of them as fairly simple creatures until now. But their biology is quite complicated. The genomes of these tube anemones may be more dynamic than those of more-complex and more-recent animals like snails, insects and vertebrates,” said Meg Daly, a professor of evolution, ecology and organismal biology at Ohio State.

About the mitochondrial DNA that is central to this study: This isn’t the DNA most of us remember learning about in school — the instructions found within the nucleus of each cell of an organism and organized in the linear double-helix.

Rather, mitochondrial DNA is usually circular in shape and contains much less information than nuclear DNA. And it lives inside the mitochondria — double-membraned structures found in multitudes within the cell, outside the nucleus. Mitochondria are responsible for energy production, and are sometimes called the “cellular powerhouses” of living beings.

While scientists have been able to sequence the mitochondrial DNA of other similar animals, they’ve hit a roadblock with these tube anemones until now, Daly said. About two decades ago, a researcher tried to create a blueprint of the mitochondrial genome based on the theory that it would be circular.

“It was impossible and no one really knew why until now,” said Daly, who has made a career of studying sea anemones and their biodiversity.

Using advanced supercomputer technology, researchers examined two species of tube anemone and found that one has five linear fragments of mitochondrial DNA and the other has eight. Previously, scientists had found a linear genome in the mitochondria of the jellyfish, but the linear structure combined with the variation in size and number of fragments seen in the tube anemone is unprecedented.

“We think that the typical loop arrangement we find makes sense, because one of the advantages of the mitochondria having a circular genome is that that it replicates easily,” she said.

“We’ve thought of this loop-shaped design as something that helps the mitochondria do its job quickly and efficiently.”

Now, it is left to Daly and others who study these creatures to figure out why this might have happened from an evolutionary perspective.

“So far, there’s no rhyme or reason to the anemones having this unusual mitochondrial genome,” Daly said.

Sergio Stampar, the Brazilian researcher who led the study, said the two species examined in this research represent the largest groups of Ceriantharia.

“These results present a considerable ‘photograph’ of the group. Besides the large size of genomes, the most surprising thing that we found is the significant difference between the two species,” said Stampar, who works at the Universidade Estadual Paulista in São Paulo.

Stampar said the work raises many questions, since the presumable change from circular to linear genomes in anemones should not be a simple process. A broad discussion about the evolution of several groups of related animals called Cnidaria — which includes jellyfish, corals and sea-anemones — is imperative, he said.

It would be tempting to expect similarities in evolutionary pressures among sea animals that are all old and relatively simple in terms of appearance and function, but this new evidence is calling that into question, Daly said.

“Maybe they all started at the same place but have been subject to different evolutionary schemes and opportunities.”

The study was supported by the National Science Foundation, the São Paulo Research Foundation, the Brazilian National Council for Scientific and Technological Development and UNC Charlotte.